LOS ANGELES, CALIFORNIA: Brendan Fraser made a remarkable comeback to the big screen with an outstanding performance in Darren Aronofsky’s “The Whale,” and he is now viewed as a front-runner to win the Best Actor prize at the upcoming awards season. Apart from “The Whale,” Fraser’s biggest release in the coming months will be the Martin Scorsese-helmed “Killers of the Flower Moon” movie on Apple TV+. Although the film hasn’t yet been given a release date, Fraser’s interaction with one of the co-stars is already gaining popularity.

Fraser works with the ‘Once Upon a Time in Hollywood’ for the first time and meets the actor on the set of the upcoming western thriller in the film, which also features Leonardo DiCaprio in a key role. The actor from “The Mummy” was surprised to learn that DiCaprio remembered the conversation they had when they first met, which made their encounter much more memorable.

Brendan Fraser’s return in “The Whale” is unforgettable and as terrifying as it can be.

From “George of the Jungle” to “The Whale”: Brendan Fraser’s ascent, decline, and ascent once more 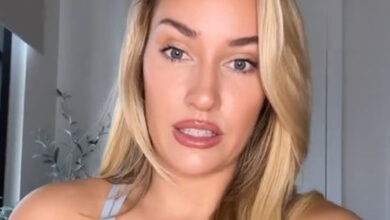 Paige Spiranac jiggles her boobs to demonstrate that they are “real and spectacular,” saying, “I need to do boobies 101.”

Russell Wilson trade by the Seahawks is being compared to the most lopsided trade ever.