We have come a long way in the prequel’s timeline as Season 1 of “House of the Dragon” slowly draws to a close. The series made a ten-year time jump in last week’s episode and introduced the new cast members. On the other hand, we observed Daemon Targaryen (Matt Smith), Lady Laena Velaryon, and their two children residing in the kingdom of Pentos. At this point, viewers thought they knew almost everything about their favorite characters, but a behind-the-scenes video appears to have revealed that there are still many things we don’t know about them.

The cast and crew of the “Game of Thrones” prequel returned to Spain to film some of the scenes, as seen in the HBO featurette. The featurette showed a lot of other things, but one scene particularly piqued fans’ interest regarding Daemon’s sexual orientation. The clip shows a scene from the “House of the Dragon” deleted scene in which Daemon is seen speaking to a servant in Pentos before moving in closer and smirking while whispering something in the servant’s ear. Daemon can be seen kissing the servant in the deleted scene, which appears to confirm that he is, in fact, bisexual. One of Daemon’s children is seen approaching him as the two characters kiss each other in the scene.

Did the 10-year time jump in “House of the Dragon” on HBO ruin the experience? Fans believe it’s leading to “problems” for the program.

“House of the Dragon” sets new records for viewers!

The extraordinary moment was first captured by the Twitter fan account “Out of the Context House of the Dragon,” which posted two stills implying that Daemon was having a sexual relationship with a man. However, after readers of George RR Martin’s books firmly asserted that Daemon is “not” bisexual in the books, the discussion quickly devolved into an argument. However, many criticized the fact that they made Daemon “bisexual” while neglecting to explore the story of Laenor, a character who is openly queer.

One user commented, “Daemon is NOT bisexual in the books. Another fan wrote on Twitter, “If they don’t put it in the show, it’s just queerbaiting – and why is that even necessary when they have Laenor to work with?” There were numerous people who thought that the scene was cut from the film because it gave the impression that Daemon had poisoned Laena. False, said a supporter. They decided not to proceed with the scene because it would have furthered the theory that she had been poisoned.

Daemon is NOT bisexual in the books.

If they don’t incorporate it into the show, it will just be queerbaiting, and why would they need to do that when they have Laenor on hand?

False. They decided not to proceed with the scene because it would have supported the theory that she had been poisoned.

I’m so glad they took it out. Although I have nothing against lesbian, gay, bisexual, and transgender people, I think George Martin would have detested it. At first, people were complaining that they showed him less affection for his daughter than in the books, where he loved them. They now demand an entirely literary item.

One of the viewers exhaled in relief that the scene was omitted from the program because it would have been unfair to the source material. Thank God they took it down, the user tweeted. It would have offended George Martin. I have nothing against LGBTQ people, but I think it was a wise choice. At first, people criticized him for showing his daughter less affection than he did in the books, where he adored them. They now demand something wholly unrelated to books. 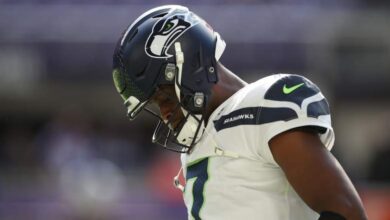 Quarterback Russell Wilson of the Seattle Seahawks has been arrested and is suspected of driving under the influence.

‘Watch out for the Big Grrrls,’ Jasmine Morrison Says About Being Sent Home, ‘I Learned a Lot’

A lot of what happened on the set of “Wednesday,” according to Jenna Ortega, was improvised.

Bryan Baeumler, star of HGTV’s “Renovation Island,” says there will be new episodes in the summer of 2022.