The UK government recently made a dramatic U-turn, much like longtime Real Madrid target Kylian Mbappe, who in May extended his contract with Paris Saint-Germain.

In light of the cost-of-living crisis hitting the average person’s wallet, Chancellor of the Exchequer Kwasi Kwarteng announced on Monday morning that he and the Prime Minister had decided to drop their plans to eliminate the tax rate paid by wealthy people earning more than £150,000 annually.

The announcement was made just one day after UK Prime Minister Liz Truss declared that she would stick with the policy despite criticism from lawmakers and the general public.

Football fans are accustomed to witnessing players make comparable transfer U-turns each summer. Here are seven of the biggest from earlier years, keeping that in mind.

Matt Le Tissier, a legend for Southampton, nearly left the team in the early 1990s when Tottenham Hotspur made a bid for him.

Le Tissier was on the verge of signing a contract with Spurs when they approached him shortly after he received the PFA Young Player of the Year award in 1990.

“That was in 1990 and it was pretty much a done deal; I’d agreed terms on the contract and everything,” he recalled, telling FourFourTwo in 2010. However, I decided against it because I was about to get married and my then-fiancée didn’t want to live in London.

In 2005, Manchester United mistakenly believed they had acquired Lyn Oslo’s teenage midfielder John Obi Mikel, and the player even gave a press conference while sporting a United jersey.

Owner Roman Abramovich was reportedly “furious” when Chelsea later claimed they had already signed the Nigerian.

Later, Mikel claimed he had been coerced into joining United when he really wanted to go to Chelsea. After several months had passed and the Blues had settled on a price with both Lyn and United, the deal was finally completed.

In the middle of the 2000s, Steven Gerrard twice came close to leaving Liverpool for Chelsea, but he ultimately stayed at Anfield.

In 2004, he was just a few steps away from making the switch when Rafa Benitez was named manager and persuaded Gerrard to stay.

Later that year, Gerrard helped Liverpool win the Champions League, but after contract negotiations failed, he was once more linked to leaving the club. He once more declined the transfer, though, and decided to extend his contract with Liverpool instead.

A dramatic transfer saga in Italy occurred in 2009 as newly founded Manchester City tried to sign Kaka from AC Milan.

Kaka was quoted as saying “I want to grow old at Milan” after City expressed interest, seemingly putting an end to the transfer rumors.

Milan supporters nevertheless demonstrated in front of his house when it was revealed that his representatives were in negotiations with City about a deal. Kaka waved at them from his window while holding up a Milan jersey because the deal had fallen through.

Mbappe’s summer contract expiration gave him the impression that he would be leaving PSG for the majority of the previous season.

After negotiations for a contract extension stalled, Real Madrid became the favorite to sign him after failing to do so the year before.

The French forward was persuaded to stay, though, by a sizable contract offer from PSG in May, and his agreement was extended until 2025.

Didi Hamann went one step further than the other athletes on this list and, prior to making his U-turn in 2006, actually signed for Bolton Wanderers.

Only a few hours after they had signed him, Bolton announced that Hamann “had since had a change of heart” and would now be joining Manchester City.

Hamann’s official stay at Bolton lasted just one day, compared to the three years he would spend at City, and the transfer was completed quickly.

Another transaction involving City produced a lot of drama when the club pursued Fabian Delph in the summer of 2015.

After growing rumors, the former Villa midfielder issued a statement that said: “I’m aware there has been intense media speculation surrounding my future in the last 24 hours and I want to clear the air. I’m staying put.

“I’m staying at the football club, and I can’t wait to lead this fantastic football club as the season begins.”

Delph signed for City less than a week after the club exercised the release clause in his Villa contract.

Cardi B unveiled a striking tattoo on her face in honor of her infant son Wave.

Who Leaves in Episode 10 of “The Challenge: USA”? 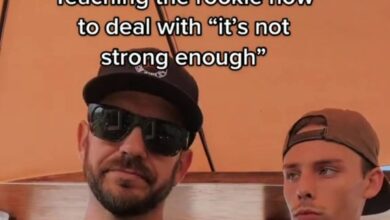