Early in the 1980s, as the male-stripping industry began to take off, Chippendales founder Somen “Steve” Banerjee looked for ways to improve the shows and grow his company. Enter Nick De Noia, an Emmy-winning television producer and choreographer who helped bring the Chippendales show from Los Angeles to New York City and turn the company into a worldwide phenomenon. Banerjee eventually planned to have De Noia killed because of his success, as was recapped in Hulu’s true-crime dramatization Welcome to Chippendales.

De Noia, who was briefly married to actor and CoverGirl spokesperson Jennifer O’Neill, won two Emmys for a run of children’s musical short films called Unicorn Tales that aired in 1977 and 1978 before turning the Chippendales show into a Las Vegas-style extravaganza. A deal was eventually reached between him and Banerjee, and it was written down on the back of a napkin. It gave him the rights and a portion of the revenue from an international Chippendales touring show.

Driver struck by debris from Britain’s “worst hotel,” which the neighborhood wants torn down

Victoria Fuller will cry during Johnny DePhillipo’s “engagement” talk on the “Bachelor in Paradise” 2022 finale. 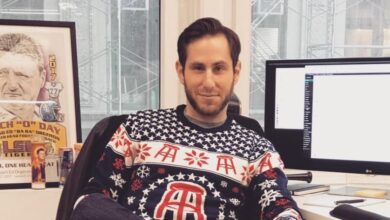 Here’s Why Kmarko Was Fired as Editor-in-Chief of ‘Barstool Sports.’